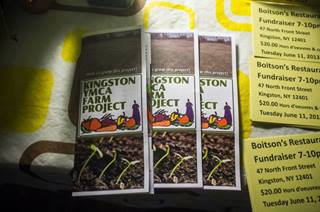 The Kingston YMCA Farm Project, located on the corner of Susan and Summer streets in Midtown Kingston, announces its “Indiegogo” crowd sourcing campaign that began on March 1st and will run through April 15th of 2014.  The group’s goal of $10,000 will help to help provide the necessary resources for its 2014 growing season.

In its first season, the new 1/4 acre farm will become a place of learning and local food production for youth and the community by incorporating the YMCA’s after-school and summer camp programs, exposing hundreds of youth to life on the farm. Along with a farm, the space is shared with Kingston’s largest community garden (hosting more than 20 raised beds) and a compost heated greenhouse/community growing space.  Plans are in the works to create a farm stand and bike powered mobile market to deliver vegetables throughout Midtown, Kingston.

Additionally,  the group will host a “Spring Celebration” on Thursday, March 20th at The Anchor, 744 Broadway in Kingston with special menu and drink items, raffles and more. The cost will be $10 at the door, and free to those who already made a contribution to the online indiegogo campaign.

The Kingston YMCA Farm Project is a part of the growing urban agriculture movement in the City of Kingston, NY located 90 miles North of New York City. Recently, a group of citizens created an Urban Agriculture Committee that worked to develop updated farm code and zoning language to advance urban agriculture for its citizens.

For more information regarding the YMCA Farm Project, contact Kaycee Wimbish at 845/332-2927 or email kaycee.wimbish@gmail.com

About the Kingston YMCA Farm Project: The Kingston YMCA Farm Project’s mission is to educate and empower young people by directly engaging them in sustainable food production on an urban farm.  Participants will learn and practice the skills needed to produce their own food and to make healthy choices throughout their lifetime, while increasing the community’s access to fresh produce.

About the Kingston YMCA Farm Project Farmer: KayCee Wimbish is an educator and farmer and is thrilled to have this opportunity to combine her two passions at the Kingston YMCA Farm Project.  She has a Master’s in Education from Bank Street College of Education, and over 10 years of teaching experience.  She taught elementary schooI for five years before pursuing her interest in farming.  She currently teaches vocational English as a Second Language to adults who are studying to be Nursing Assistants.  For the past two years she has taught food preservation classes at libraries and in people’s homes.  She has been farming in the Hudson Valley for the past 7 years, working at Hearty Roots Community Farm, a vegetable farm that uses the Community Supported Agriculture (CSA) model.  She also owned and operated the former Awesome Farm, a pasture based animal farm, raising cattle, sheep, turkeys and chickens.  In 2013 she was the grower at South Pine Street City Farm and the farmer educator for the Dig Kids, an urban farming program for teens in Kingston.